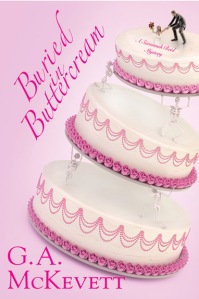 THE CONTEST IS OFFICIALLY CLOSED!!!

After a recent brush with death, plus-sized P.I. and bride-to-be Savannah Reid has decided to stop sweating the small stuff. But when an event planner comes in to arrange her wedding, Savannah discovers that murder can ruin even the best laid plans…

Hailed as the wedding planner to the stars, Madeline Aberson has orchestrated some of the most exclusive soirees in Hollywood. But when Madeline becomes embroiled in a nasty divorce, her life falls apart, and rumors swirl that her parties have become total duds. Desperate for work, Madeline finds herself planning far less glamorous affairs, including none other than Savannah Reid’s wedding to Dirk Coulter.

It doesn’t take long for the opinionated Madeline to get on Savannah’s last nerve, and when the big day finally arrives, Savannah can’t wait to send Madeline packing. But when the bride finds Madeline’s body face down in the pool, floating among an elegant array of rose petals, it’s clear that someone has already hastened the diva’s departure. For better or for worse Savannah and Dirk put their wedding on hold, vowing instead to find out who killed Madeline and why…

If it weren’t for bad luck, Savannah and Dirk would have no luck at all. As Savannah and Dirk stand in shock, watching the building where they were to be married burning to the ground, with her wedding gown and the bridal party’s dresses burned to cinders.  The unhappy couple are discussing the fact that Dirk should not have hit the fireman (a friend of Dirk’s) who stopped him from running back into the building to try and save Savannah’s and the Bridal Party’s dresses.

Jim’s phone rings and he turns away from the unhappy couple to answer it and find out that the fire was a case of arson and that it appeared to be the work of a serial arsonist who they were looking for.  Dirk and Savannah decide to help look for a suspect since their training gave them the knowledge that most arsonists stick around to watch their work and get some sick pleasure out of it.  They split up and start looking carefully through the crowd.  Savannah notices a lone watcher on a high point over the parking lot and slowly approaches from a tangent.

She calls Dirk and tells him she thinks she’s got their guy.  She quietly approaches and finds a young man so fixated on the fire below that he is unaware of Savannah’s approach.  Noticing a reversed Pentacle on a chain around the suspect’s neck she calls Dirk with her location and that she is sure this is the guy. Long story short, they collar the guy and he’s off to jail.

Dirk and Savannah are now at a loss with how to proceed with their wedding plans. They’ve spent a bundle and can’t afford to be this extravagant a second time.  Thankfully they have wonderful friends in John and Ryan. These wonderful guys have decided to gift Savannah with a Wedding Planner to help them find a new venue for their wedding at a price they can manage to squeeze out of their savings.

While everyone has heard of Bridezillas, Madeline is the Planzilla of the worst sort.  After Van gets her to actually listen, they manage to find a sort of happy medium on venues and costs.  The wedding is back on.  Of course while all this is going on, Van’s family is ensconced in her small house rubbing on her last nerve and eating her out of house and home while turning the place into a veritable pigsty.

Finally the happy day again arrives, and as Savannah gets ready to walk down the aisle she asks her sister Marietta and asks her if she has Granpa’s ring.  Marietta looks at her blankly for a second and thinks.  Oh, I stuffed it in that big white garbage bag with all your other stuff.  Savannah takes off for the Bridal Room praying that the bag is still there, along with the ring she was going to give Dirk.

Entering the room she finds the ring and looking out the French Doors to a patio attached to the Bridal Room. There she see’s Madeline face down in the pool DEAD!  Calling her sister Marietta to go and get Dirk, she verbally chastises her for arguing. She tells Dirk that he might as well bring Dr. Liu along since she’s the Coroner and can begin processing the scene. Another wedding day ruined and a probable murder to solve.

I love this series. I’ve been a fan since “Just Desserts” came out so many years ago.  I am sure that this series will be around for many more years.
FTC Full Disclosure: I received this book from the publisher who only requested a fair and impartial review.

The publishers have kindly offered me a copy of Buried in Buttercream  for one lucky entrant.

The author, G.A. McKevett has graciously offered to send a personalized bookplate to the lucky winner.

Tell us why you want to win “Buried in Buttercream”. You must leave a valid e-mail address in the comment box with your comment (it would also be nice if you became a follower of my site but it’s not necessary to enter).  Please break it up using (at) and (dot), like domain (at) host (dot) com.  This is only open to US & Canadian mailing addresses—sorry, no international entries this time!  Contest ends on Friday March 30th.  at 6pm EST.  Winner will be notified by e-mail and has 2 days to respond.  The book will be shipped directly from the publisher. The winner will be chosen by using random.org to make things fair.